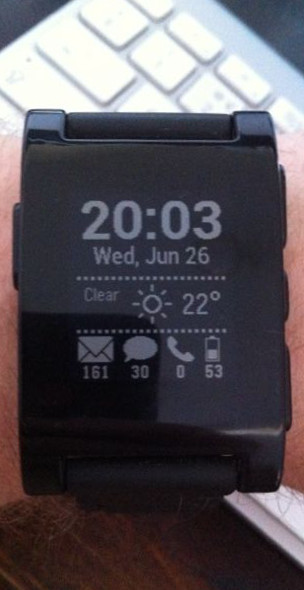 The first iOS app that makes your Pebble smartwatch even smarter!

Get it now on Cydia! 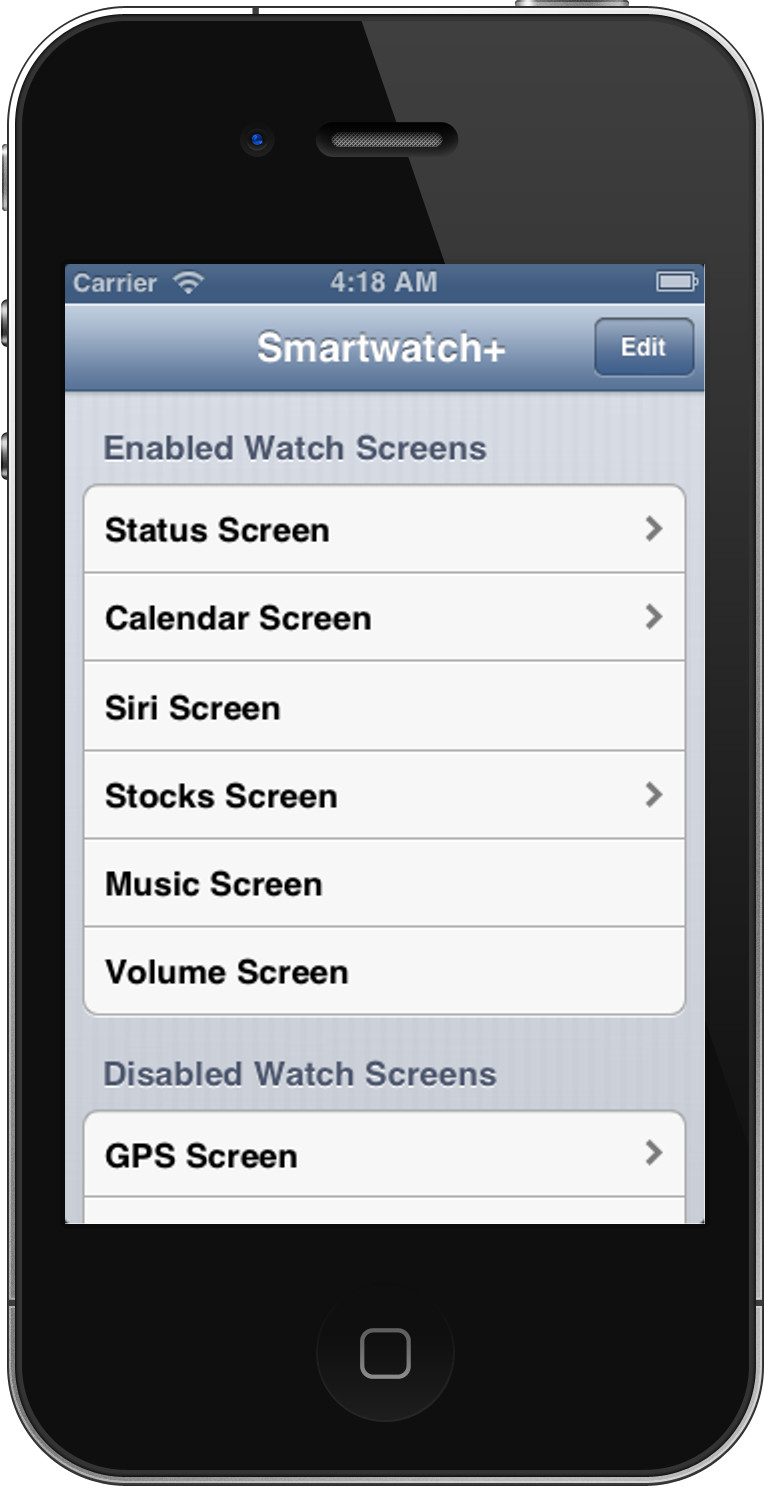 Smartwatch+ is an iOS companion app that enhances the experience with your Pebble smartwatch. Smartwatch+ allows you to display additional information on your watch, such as weather, your iPhone's battery status, unread SMS/email and missed call counts, current stock and Bitcoin prices, your current GPS location, and your latest calendar appointments. Additionally, you can control certain functions of your phone from the watch, such as replying to text messages and initiating calls, launching the camera and taking pictures, controlling the phone's volume and activating Siri.

Smartwatch+ for jailbroken iPhones (running iOS 6.0 and newer) is available through the Cydia Store. You don't need to add any repositories, as it is hosted inside the BigBoss repository, which is part of the standard Cydia installation. Click here on your iPhone or search for Smartwatch+ in Cydia.

There's also a version for regular non-jailbroken iPhones on the App Store now. It does offer less features, but you might still want to check it out if you don't have a jailbroken device.

Smartwatch+ uses different screens to display data on the Pebble watch and to interact with an iPhone. The screens can be accessed through a menu on the Pebble watch using a custom watch app. The iPhone app lets you configure the number and order of screens to adjust it to your individual needs. All screens that display data are automatically updated at user-defined intervals.

SmartStatus is technically a screen as well, but it acts a little bit different in the sense that it's not part of the regular menu. Instead it is its own watch app and provides the iPhone's battery and status counters, which dynamically change as soon as the correlating info on the iPhone changes. More info on SmartStatus can be found here.

Currently, there are 12 screens available in Smartwatch+:

The iPhone app lets you adjust the number of active screens on the watch by dragging them between Enabled Screens and Disabled Screens. It also lets you change the display order of the screens.

Several screens have individual settings screens to configure their update frequency and other parameters:

Technically, the current iteration of the Pebble SDK does not provide two-way communication between a smartphone and your watch. To circumvent this limitation, Smartwatch+ uses the built-in music app of the Pebble to display information from the iPhone and send button presses back. Admittedly, this is kind of a hack, but it's the only option for now. The downside of this hack is that it will only work with jailbroken iPhones.

On the Pebble watch you can access Smartwatch+ by selecting the Music app in the main menu. You will be presented with the first screen and you're able to cycle through all enabled screens using the "previous song" button. In screens that merely display information (Status, GPS, Bitcoin, Stocks, Calendar), the data is automatically updated at user-defined intervals. In addition, data can be manually updated using the middle (or select) button at any time. In screens that interact with the iPhone, a line of text describes the action that will be triggered by a corresponding button press.

I will consistently add features and additional screens to Smartwatch+.

Some things that I'm currently working on:

If you have a good idea what the next feature of Smartwatch+ should be, please go to http://smartwatchplusapp.uservoice.com and make a suggestion/vote on other users' ideas.

As soon as the extended Pebble SDK is released, I will integrate Smartwatch+ with it, such that it doesn't need to live inside the built-in music app anymore, but has its own app on the Pebble watch.

All future updates will be included in the purchase price.

You need to understand that Smartwatch+ is very much a work in progress. At this early stage of the Pebble smartwatch itself and the software development around it, things are not perfect, can break at any moment and will certainly change over time while the ecosystem around smartwatches is slowly catching up to their abilities.

Before you purchase Smartwatch+, you should be aware of the following limitations:

Bugs/Software issues:
Although I've extensively tested Smartwatch+ with the help of several beta-testers, I'm not able to test every single device configuration. The app is at a very robust stage right now, but you might still run into issues with your specific setup. Don't hesitate to contact me with any issues that you might encounter and we'll find a solution together.
Battery life:
Smartwatch+ will negatively affect the battery life of your iPhone, as well as your Pebble. Since the iPhone app is continuously running in the background (and fetching data from the internet), it uses more power than other apps that are able to be suspended. I cannot say how much more power is used, as it largely depends on the frequency of updates, whether the GPS screen is active, etc.. Future versions of Smartwatch+ will try to reduce power consumption.
Siri:
The integration of Pebble and Siri does not work perfectly at the moment. This is not an issue of Smartwatch+, but a general issue with the Pebble watch. One of the beta testers has written about his experience with Smartwatch+ and Siri here
Music Playback:
You can start regular music playback on your iPhone using Smartwatch+' Music Screen. Currently, music playback is restricted to the built-in iPod music player. While music is playing, you will not have access to any of the other screens, since the regular playback controls are exposed to you by the iPhone - Pebble pretty much acts as if Smartwatch+ is not present during music playback. As soon as you pause the music playback, you'll be automatically back in Smartwatch+' Music Screen and you can use it the same way as before.


All that being said, Smartwatch+ is still a very nice addition to your Pebble smartwatch, as it is the first glimpse into advanced functionality in conjunction with an iPhone. I'm fascinated by the possibilities that the Pebble smartwatch provides and I'm committed to create software that makes the best use of this great piece of technology.

Here are some of the most commonly asked questions:

The camera app is not launching - what do I do?
One additional reboot of your phone will fix this issue for now. It has to do with extended app entitlements, that are required to launch different apps. An additional reboot will fix the entitlements for good.
How can I reduce the battery usage of Smartwatch+?
Smartwatch+ itself doesn't use too much battery. What drains the battery are the constant updates (and the GPS). So if you increase the different screens' update frequencies to 30 minutes or more (and disable the GPS screen), this should lower the battery usage. If you want to reduce it even further, switch the update frequency to "Manual"
My calendar is showing "No Events" even though I've got events scheduled
This may occur when you first run Smartwatch+. Just quit the app and restart it - that should permanently fix it.
Can I turn Smartwatch+ off when I don't need it in order to save battery?
There's no switch to turn off Smartwatch+ right now. Instead you can just quit Smartwatch+ from the iOS multitaskbar, as you would quit any other app.
Does Smartwatch+ always need to run?
Yes, in its current iteration Smartwatch+ needs to be constantly active in the background in order to communicate with the Pebble watch. Once you quit Smartwatch+ using the multitask bar in iOS, the iPhone, as well as the Pebble watch are back to their original operation - exactly as they were before using Smartwatch+.

dezign999, one of the early beta testers (who also designed the awesome app logo) was nice enough to provide this important information about Smartwatch+ and Siri:

You can always email me with any questions/ideas/suggestions/bug reports.

Further discussions about Smartwatch+ can happen on the Pebble forum and on reddit.